Farewell to a classic 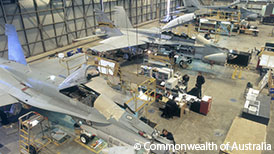 Boeing has partnered with the RAAF and Australian industry for much of the past 20 years to help transform the Classic Hornet capability.