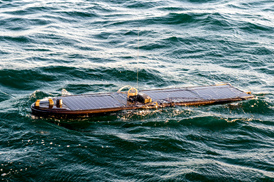 The Wave Glider is the platform of choice for the anti-submarine warfare project.